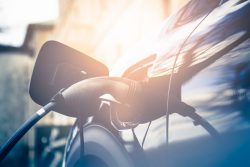 Amid the years-long discussion of replacing combustible engines in California with electric vehicles (EVs) and the impact that will have on the state’s power grid and economy, there’s a looming issue that most everyone on either side of the debate rarely approaches — the life cycle of an electric vehicle (EV) battery.

Regardless of where you fall on the clean energy spectrum or government regulation surrounding it, how long EV batteries last and what happens to them after they’ve been exhausted matters for the environment, your budget (especially if you have electric vehicles in your fleet), and the future of business in general.

How Long Do EV Batteries Last + Where Do They Go

Of the over 28 million registered vehicles on the road in California at the end of 2020, only about 635,600 were light-duty zero emission vehicles, according to the California Energy Commission (CEC). Just under a quarter of those – 156,698 – were located in Los Angeles County, with Tesla leading the way (significantly) across the state.

Regardless of whether you’re talking a Tesla Model 3, a Toyota Prius Plug-In Hybrid, or a Chevrolet Bolt – the batteries in EVs all have one thing in common: a shelf life. According to Car & Driver, while most electric cars come equipped with a 100,000-mile warranties, those warranties only go into effect when the battery stops working entirely, which is rarely the case.

More likely, throughout the life cycle of a lithium-ion battery, which EVs are equipped with, individual cells within the battery will fail one at a time versus all at once. That means that the battery will hold a charge for less and less time, with depletion typically occurring quicker in hot climates and when users don’t follow manufacturer recommendations with regard to charging.

For that reason, as well as the increase in popularity of EVs globally, about 3.4 million EV batteries are forecasted for stockpile by 2025 compared to the 55,000 currently, according to EY Global.

In China – the world’s leading producer of rare earth materials used in the production of EV batteries – recycling has also become big business. For the past several years, the country has continued to pursue recycling technology, with it now calling on global support.

As it stands, according to Global Times, China’s total decommissioned power batteries reached about 200,000 tons in 2020, and the figure will rise to about 780,000 tons in 2025. Worldwide, only about 5% of lithium ion batteries from EVs are recycled at all, with most ending up in a landfill despite being packed with toxic minerals.

Although most EV batteries are discarded, a large portion of those found in landfills still retain about 50-70% of their power capacity.

In other words, if the right recycling procedures were in place, batteries no longer suited for EVs could be repurposed for applications that require less power – like storage of power generated by solar and wind, grid stabilization, back-up power supplies, and even EV charging.

The problem is, that doesn’t exist yet, despite a major push taking place now to get more EV on the road.

“The market for recycling holds huge potential, but it is constrained by several factors: not all battery chemistries are equally suited to recycling, and there is a wide range of different chemistries and battery pack types currently in use,” according to EY Global. “Furthermore, the process itself is complex and expensive: commercial smelting produces a mixed product from which the vital lithium must then be extracted via further treatment at additional cost. The economics are therefore not favorable at present (the value of raw material reclaimed is approximately one-third of the cost).”

There’s also environmental risk in recycling EV batteries. If released into the air, the nickel, manganese, and lithium hexaflurophosphate contained inside can do major harm to the environment, such as producing phosphorus pentafluoride and hydrogen fluoride.

Despite the drawbacks long term, many companies like Amazon are turning to all-electric fleets due to their environmental benefits during operation – and the ease that comes with not having to manage frequent service intervals and fluids.

The problems, however, could outweigh the benefits – both from an operational standpoint and from an environmental lens. On top of the cost for recycling, the cost of a new battery in an EV accounts for about 50% of that vehicle’s overall cost.

“We encourage our customers to look at both the environmental and economic impacts as a whole rather than simply a ‘Not in my backyard’ mentality when adopting green initiatives,” said SCL Manager Travis Becktel. “There’s a lot of information available to help owners adopt blended strategies that address their carbon footprint, long-term budgetary needs and overall company goals. Electric vehicles come with their own pros and cons that people – regardless of industry – need to be aware of before taking the plunge and changing their business model, and that includes cost, environmental impact, and usage.”