The Dirty Side of “Clean Energy” 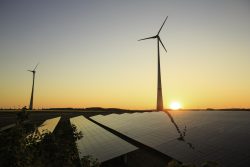 Why We Believe Efforts in the Name of Green Energy, Zero Emissions Are Not What They Seem

Thanks to its prominence on both the political stage and in the media, the debate surrounding “clean energy” has the potential to go from 0 to 60 like few others. And while supporters of green technologies and sustainability initiatives that reduce reliance on fossil fuels have drawn support, at SCL we believe “clean energy” has a dirty side many do not know.

In addition to placing increasing regulations on businesses already struggling to survive the COVID-19 pandemic and the associated economic downturn, measures aimed at achieving zero emissions do little to move the needle on environmental impact short-term and come with a number of long-term adverse effects.

The reason? Clean energy has a dirty secret – well, a few actually. One, it’s not as clean as many elected officials and supporters want people to believe. And two, since the 1970s, Americans have already drastically reduced the concentrations of air pollutants while simultaneously increasing our use of fossil fuels and the number of miles we drive, according to the EPA.

Supporters of “clean energy” want us to believe our reliance on fossil fuels is the sole devastating factor to the environment, but reports from the EPA state the contrary. Those same supporters also fail to mention the environmental impact of producing sustainable energy technologies and the countries that benefit from the production of those technologies (hint, not the United States).

According to The Clear Energy Alliance, efforts like wind, solar, and car batteries “require massive amounts of copper, nickel, rare earth metals, lead cadmium and cobalt. Many times, these materials are mined in countries where there are few, if any, protections for the environment or workers.”

China, for example, owns an estimated 80% to 95% of the rare earth mineral market – making it the dominant supplier of materials used for everything from smartphones to computers. In 2020, according to Statista, China mined 140 million metric tons of those rare earth minerals, far more than any other country worldwide. The United States, on the contrary, hosts only one provider of rare earth minerals – Mountain Pass Materials in California.

In the past several years, China has also been buying up mines along the African coast, where unsafe working conditions for adults and children have been a concern for decades.

Labor laws and environmental regulations of the United States, to clarify, do not apply to foreign entities with whom we do business. In 2010, according to a study published by the China Economic Review, youth in the country age 10-15 work an average of just under 7 hours per day.

There’s also the issue of those materials once they are mined. Currently, a global chip shortage has forced major automakers – including American automakers – that are pursuing electric models to pause production after supply chain caused lingering disruptions.

According to MSN, “Consulting firm AlixPartners forecasts the (chip) shortage will cut $60.6 billion in revenue from the global automotive industry this year. GM expects the problem will reduce its free cash flow by $1.5 billion to $2 billion this year. Ford said the situation could lower its earnings by $1 billion to $2.5 billion in 2021.”

“When you consider that our air quality has seen drastic improvements over the past 40 years thanks to regulations already in place and the innovation that naturally occurs in business, it’s difficult to understand why pursuing even more regulations could be beneficial – other than the rhetoric that’s being used, of course,” said SCL General Manager Travis Becktel. “As someone who wants and enjoys a clean environment myself, both for my own recreation and for my children, I understand the motivation. But wanting to protect the environment is not enough to blindly support policies that kill American business with a not in my backyard mentality. There’s a story not being told, and as a leader in the oil and lubrication distribution industry, we have a duty to educate our customers on the truth behind some of the rhetoric being told by those in public office and others who support these policies.”

The Life Cycle of Green Technologies

In addition to the adverse environmental and global effects that come with the production of green technologies, there’s also the issue of what happens once the equipment wears out.

When it comes to batteries, improper recycling has led to lead infiltration in the soil in many countries worldwide. For wind turbines and solar panels, after about 20-25 years, much of the material ends up in landfills.

As on example, according to InsideEnergy.org, Ponnequin Wind Farm on the border of Colorado and Wyoming retired the country’s first generation of wind turbines in 2016 – destroying 44 turbines with dynamite and dumping the unrecyclable fiberglass blades (and the residue) in a landfill.

When it comes to improving air quality, limiting our impact on the environment, and pursuing technologies that allow our industry to become better stewards of the world around us, there is no question those measures amount to benefits we all reap.

The issue comes when government places restrictions on businesses to make those advancements come faster, stifling the ability to fund innovation and bring to market technologies that lessen environmental impact on their own.

“We understand that our industry is one that demands many regulations – and in many cases, we believe those regulations are justified in order to ensure we all operate at a high standard,” Becktel said. “But at a certain point, you have to question whether what we’re being pushed toward makes sense for business and, frankly, for our environment. Letting the markets decide how quickly we move toward greener and more sustainable practices. Regulating our way through at this speed will squash businesses that provide employment and important services to communities – whether that’s a trash truck, a construction vehicle, or an auto services shop. We are a leader in our industry, and it’s our responsibility to have these discussions and to share relevant information with our customers – especially when so many in our industry share our same concerns.”