3 Questions We Have for Gov. Newsom on California’s Renewable Energy Efforts 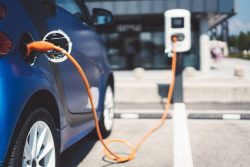 California already generates more solar power than any other state, and in the wake of a new ban on internal combustion engines by 2035 announced by Gov. Gavin Newsom, the push toward renewable energy is in full speed.

While many support minimizing impact on the environment, the demand Newsom’s agenda places on businesses is often seen as unjustifiably second to long-term environmental benefits. Critics also say there are still plenty of looming questions about Newsom’s executive order and his plan for the future.

Here are three questions we feel need to be addressed in order to accurately gauge the impact a more aggressive push toward renewable energy will have on our industry:

1. If all cars go electric, what will the presumed decrease in gas tax revenue mean for road maintenance and construction?

This fiscal year alone, the California gas tax is estimated to bring in over $7 billion for road construction and maintenance throughout the state. The tax – which state leaders have increased three times in the past four years – has also not been without controversy. With presumably more demand for that revenue stream based on its continued increase, if there are fewer gas-powered vehicles on the road, where will that revenue come from?

“We know that a move toward electric fleets will lead to greater expenses for our customers and greater logistical concerns with regard to charging stations,” said SCL General Manager Travis Becktel. “But in addition to that, it also brings up the question of where that loss in revenue is going to come from for the state on the whole. Should we brace for increased taxes in other areas or even new taxes not currently on the table? It’s our job to pose these questions so that our customers can adequately prepare and so that our elected officials take the concerns of our industry into account.”

If taxes do shift to other areas such as utility companies to make up for the shortfall in gas tax revenue, does that mean people without any cards on the table – or cars on the road – will be forced to adopt an even higher cost of living to foot the bill?

2. How does the state plan to support more renewable energy with an insufficient grid?

Although solar power has rapidly grown in the past decade in California – and the state has successfully continued to increase other renewable sources like hydroelectricity – there’s still an undeniable infrastructure problem. According to The New York Times, “California’s utilities and regulators are now wrestling with the question of how quickly they can reduce natural gas use while still maintaining reliable power.”There’s also the issue of storing solar energy at night, which currently California’s system cannot do.

“Our solar grid only works during the daytime and we currently only have a small percentage of electric cars, so the current infrastructure of occasional charging stations and few battery storage stations is relatively sufficient,” Becktel said. “But if our desire is to have predominantly electric cars, the infrastructure is not there. We currently do not and cannot generate enough power to sustain the demands we currently have on our system, which is evidenced by how much energy we continue to important yearly. If we’re going to move in this direction, we have to have an infrastructure in place first to make it worthwhile.”

In 2018 the California Energy Commission reported an estimated 34% of California’s energy came from renewable sources, but that data doesn’t account for imported power from states like Utah, where Los Angeles will continue to get coal-fired electricity from for another five years. As of 2018, 31.7% of California’s electricity was imported, of which 33.2% was of unspecified origin and 29.2% were renewables.“We all want to move toward a way of doing business that lessens our impact on the environment, but we need to do it in a way that does not put undue stress on our infrastructure and our businesses,” Becktel said.

3. Will mandates on businesses reduce their budgets for renewable energy practices and products and, thereby, reduce the demand for innovation?

With greater efforts by the state to tighten fuel emissions has come greater efforts by businesses to pursue products and practices that do the same. Potential savings in fuel economy has also increased demand for higher quality, greener products from industry leaders like Shell, Chevron and others.

“If our customers want to tighten their budgets, whether that’s to be more conscious due to the cost of doing business or a dive in profits, a lot of times the first move is toward using less expensive products,” Becktel said. “We know that when you take into account fuel economy and other long-term costs that’s not the most efficient move, but that is the move customers take nonetheless. If people are focused on tightening the purse strings, they aren’t going to invest in the innovation that, ultimately, we all know is necessary in the field of green energy. We have to make sure we’re accurately balancing pushing our businesses and our industry toward greener practices without being a detriment to their business.”