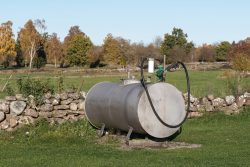 Over the past decade, the move toward ultra-low sulfur diesel fuel (ULSD) has led to a massive decrease in pollution as the cleaner-burning option contains 97% less sulfur than the previously used low-sulfur diesel (LSD). Those environmental benefits, although substantial, have come at a cost, particularly for businesses that store diesel on site.

Prior to about 2006, most crude oil was refined utilizing a process called distillation, which provided a stable fuel rarely impacted by fuel degradation. A 2007 mandate that ushered in ULSD led to different processes for all fuels, including diesel. Since this change, and subsequent mandates that required ULSD to be used in a variety of other applications such as off-road and transportation applications, fuel degradation has become a common problem.

According to the U.S. Energy Information Administration, the introduction of ULSD as well as mandated exhaust emission control systems on vehicles since 2007 has led to a reduction in particulate emissions by up to 90%. Emissions of nitrogen compounds, which pose a direct link to acid rain and other adverse environmental effects, have also decreased by 20% to 50%.

It isn’t all positive, however, as ULSD has been shown to attract more water and have less resistance to fungus and microbes than fuels higher in sulfur. In addition to a much higher risk of tank contamination, ULSD can also lead to tens of thousands of dollars in equipment damage if contaminated fuel is inadvertently pumped into diesel equipment.

The solution: regular monitoring, filters where applicable, and if necessary, swift treatment – all of which will be covered under the new SCL Fuel Assurance Program.

Water: The Key to Contamination

Keeping water out of tanks is the first and most important step to preventing degradation of supply, but even with good housekeeping there’s no foolproof method preventing contamination.

Water often enters tanks through poorly fitting or missing fuel caps; it can also be drawn in through vents, temperature fluctuations that cause droplets to condense on inside walls, and a natural accumulation of water over time.

All of that provides a breeding ground for microbes, which tend to thrive ULSD far more than higher sulfur diesel that was previously used.

Due to a loss of naturally occurring lubricants, ULSD must be compensated with lubricity additives to protect the moving components of engines that rely on fuel as a lubricant. One common way to achieve the desired lubrication levels is to blend in low levels of biodiesel, which has the unwanted side effect of migrating toward any water present in the fuel. That means when water gets in – either through tank vents, high temperatures, humidity, natural settling, or a host of other ways – it makes it easier for water to become emulsified in the fuel.

In other words, water can do far more damage in far less time in ULSD than in conventional diesel, prompting the rapid growth of microbes that attach to water and do major damage to fuel supplies, tanks, and any machines that use contaminated diesel.

Once microbes are present, they “multiply, and produce biomass and slime growth, which will plug filters in the storage tank.” They are also heavily linked to “accelerated breakdown of fuel stability because, not only do they produce biomass, but they give off acids and biological byproducts that attack and break down fuel quality,” according to a leading producer of diesel and fuel additives.

Once contaminated fuel is used in machines – which happens inadvertently – it can quickly clog filters, resulting in engine shut down, fuel pump wear, and diesel engine damage.

“We never saw this as a problem in previously used diesel varieties, but we are definitely seeing it now. If customers don’t turn over their fuel routinely – say, for example, if we’re talking 500-gallon tanks where it sits for 60 to 90 days – that will make their diesel much more susceptible to gaining water, which leads to fungus and contamination,” Kerslake said. “You have to focus on preventing those issues before they occur by maintaining that fuel tank on a regular basis, and if it does occur, you have to act fast to remove it before it does irreparable harm to your supply, your tanks, or your machines.”

ULSD degrades 26% in the first 28 days without any problems; when water is present that degradation can increase up to 95%.

The SCL Solution of Fuel Assurance

A new Fuel Assurance Program introduced by SCL is now available for all customers with loaned tanks as well as any customers that store diesel on site. Under the program, customers will receive:

• Schedule replacement of filters (spin on and desiccant breathers)

• Fuel polishing by an SCL expert, when necessary

“We’ve seen large diesel storage tanks succumb to contamination too often and at too high of a cost to our customers to not offer a solution,” said SCL General Manager Travis Becktel. “We understand and recognize the benefits of USLD, but we want our customers to understand it requires a closer eye than previously used diesel, otherwise they’re at risk of doing serious – and costly – damage to valuable machines, which in turn leads to down time. This is a major issue we want our customers to get in front of so they can prevent those high costs and headaches down the line, and we want to help them do that.”

To learn more or to enroll in the SCL Fuels Assurance Program, contact your SCL sales representative today or email kerslakek@scoil.com.