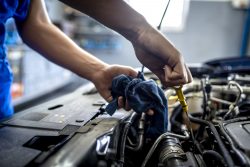 Following requests from automakers for more robust engine oils adept at meeting the demands of today’s engines, new ILSAC GF-6 and API SP specifications for motor oil have now been in effect for over five months, since May 1, 2020. Now that customers are beginning to place their first orders since the transition, there are a few things to know.

Meant to improve fuel economy and reduce greenhouse gas emissions, according to Kevin Ferrick, director of Product Programs at the American Petroleum Institute (API), the new specifications mean a change in product for automotive customers and their customers.

As far as SCL customers go though, there should be little to no disruption.

“Most of the time, our customers don’t have to do anything to receive product that meets these new standards; that’s our job,” said Cory Funk, SCL Passenger Car Motor Oil (PCMO) Coordinator. “The issue is that sometimes when these new specifications are approved, the oil manufacturers have to change their base stocks and their additives chemistry, and that cost gets passed on to us. Especially in this environment, we are doing everything we can to help minimize the impact on our customers and work to defer any added cost that could come down the pike.”

The Pursuit of Higher Standards

In addition to automakers who initially pushed for the latest specifications, their development and implementation has involved API, the International Lubricants Standardization and Approval Committee (ILSAC), and oil producers. They also come after seven years of testing, where oils were evaluated to determine whether they could hold up to even more stringent requirements “to ensure current and future engines perform as designed,” states API.

Implementation of Corporate Average Fuel Economy (CAFÉ) standards by the National Highway Traffic Safety Administration (NHTSA), which regulates how far different vehicle types must be able to travel on a gallon of fuel, also played a part in introduction of the new specs. But that isn’t much of a surprise.

“Changes in motor oil specs, historically, occur every four to six years, and it’s really driven by the government and the efforts to decrease greenhouses gases,” Funk said. “Everyone is pushing auto manufacturers and oil manufacturers to improve fuel economy, reduce pollutants in the air, and this is the result of that. As technology advances to meet those standards and manufacturing processes changes, oil that goes into those engines must also advance.”

Details on the Standards

In addition GF-6 motor oil has further been broken down into two levels – GF-6A and GF-6B – where low viscosity levels like OW-16 are in their own category (GF-6B). That separate category is only because new low-viscosity oil OW-16 is not compatible with most older engines, and therefore warrants a separate category, according to API.

Oils that meet the ILSAC GF-6A standard will display the traditional API Certification “starburst” and may be used where oils meeting GF-5 or earlier gasoline engine oil standards had been recommended. Oils that meet ILSAC GF-6B will be allowed display a new “shield” mark, to help avoid confusion.

Whenever any product is phased out, SCL begins letting customers know months in advance, as has been the case with motor oils coming to market that meet new specifications.

“In a perfect world, since we’ve been communicating with our customers about this for some time, their drums and barrels would now be empty, and our drivers could fill them with the new product,” Funk said. “For most of our customers, that isn’t reality, which is why backward compatibility is so crucial. Most installers have 1/3 tank of old product and we’ll fill it with new product. As long as it’s the same viscosity and we know it’s backward compatible – which is the case with 99% of motor oils – it can be used for older cars and newer cars.”

New labels will also be provided by SCL drivers to all customers once new product is delivered, Funk said. With new specifications come requirements for new labels for all tanks.