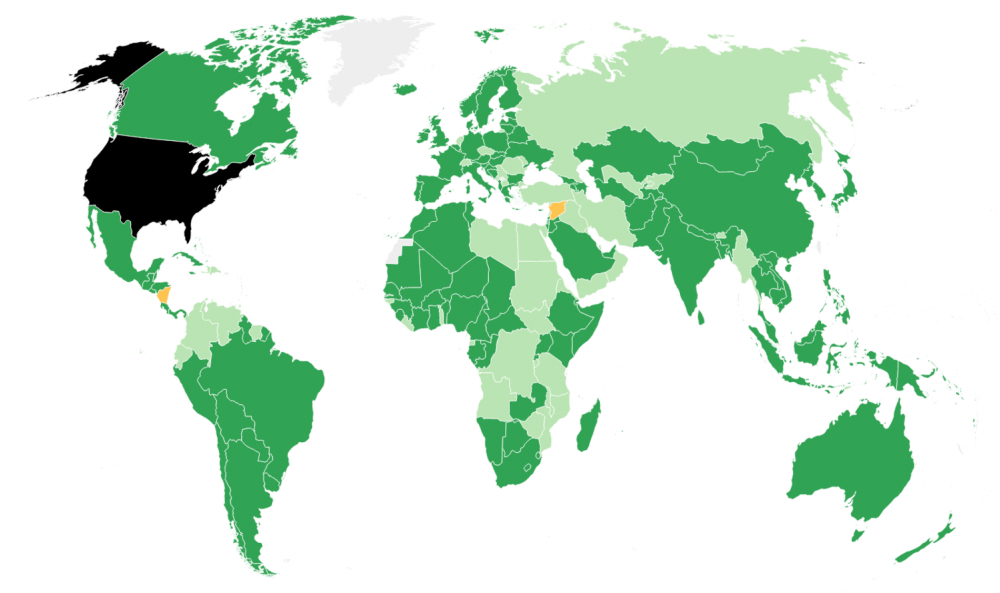 A Year After President Trump’s Decision

The Paris Climate Agreement was created within the United Nations Framework Convention on Climate Change (UNFCCC), drafted in the winter of 2015 and signed into existence on April 22, 2016 in Le Bourget, France. Designed to address the mitigation of global greenhouse gas emissions by 2020, the Paris Climate Agreement is a long-term vision to maintain the global average temperature of the planet in an effort to reduce the risks and effects of climate change. An international meeting of the minds, the Paris Climate Agreement was initially signed in 2016 by 196 participating nations. By June of 2017 that number had shrunk by one – the United States, who made the decision to withdraw from the accord under the new leadership of President Donald Trump. Trump stated that the agreement, signed by every other country on Earth, is “An agreement that disadvantages the United States to the exclusive benefit of other countries.” His decision to withdraw sent shockwaves around the world and drew strong criticism from global scientific and environmental communities. So why did we withdraw, and what have been the effects?

Participating countries in the Agreement are required to develop a comprehensive plan to effectively minimize their individual contribution to global warming and must report on their progress to the collective. From the UNFCCC website,

“The Paris Agreement central aim is to strengthen the global response to the threat of climate change by keeping a global temperature rise this century well below 2 degrees Celsius above pre-industrial levels and to pursue efforts to limit the temperature increase even further to 1.5 degrees Celsius. Additionally, the agreement aims to strengthen the ability of countries to deal with the impacts of climate change. To reach these ambitious goals, appropriate financial flows, a new technology framework and an enhanced capacity building framework will be put in place, thus supporting action by developing countries and the most vulnerable countries, in line with their own national objectives. The Agreement also provides for enhanced transparency of action and support through a more robust transparency framework.”

How Other Countries Responded to the Agreement

Setting progressive targets and deadlines, many countries took extreme measures. France announced a plan to ban all petrol and diesel fuel vehicles within the country by the year 2040 and that they would eliminate coal production for electricity by 2022. Norway also stated a ban on the sale of petroleum and diesel vehicles by the year 2025 and the Netherlands following suit with the same plan by 2030 along with promising to exceed Paris Agreement goals by 2050 in greenhouse gas emissions.

The United States has the largest economy in the world and has been ranked as the second highest contributor to carbon emissions next to China. President Trump’s decision to withdraw from the Paris Climate Agreement was one of his strongest campaign elements, believing that the Agreement puts the United States at an economic disadvantage and influence. Former President Barak Obama was part of the Paris Climate Agreement development and adopted climate change as part of the narrative of his presidency. He has been critical of President Trump’s decision to withdraw from the accord, stating, “The nations that remain in the Paris Agreement will be the nations that reap the benefits in jobs and industries created. I believe the United States of America should be at the front of the pack. But even in the absence of American leadership; even as this Administration joins a small handful of nations that reject the future; I’m confident that our states, cities, and businesses will step up and do even more to lead the way, and help protect for future generations the one planet we’ve got.” President Trump’s decision to withdraw from the accord and his subsequent tweets have been met with both international and domestic criticism. Said the President, “We are going to be environmentally friendly, but we’re not going to put our businesses out of work, and we’re not going to lose our jobs. We’re going to grow.”

According to a World Wildlife Federation article, US climate action has actually increased following the announcement to withdraw from the Paris Climate Agreement. Nations, leaders and citizens around the country have come together to uphold the climate targets created by the accord and a grassroots movement has taken the lead in the face of deregulation at the US federal government level. Says the article, “Since the US pulled out of the agreement, more than 2,700 leaders from states, cities, and businesses—representing 160 million Americans and $6.2 trillion of the US economy—have ramped up their efforts to curb climate change, sending a resounding message to our federal government and the rest of the world: We are still in.” And technically the US is still “in,” remaining within the Agreement until November of 2020, as per the rules of the accord. That timeline coincidentally coincides with the 2020 Presidential election. Whether the Trump administration procedes with an official withdrawal or not, only time will tell.