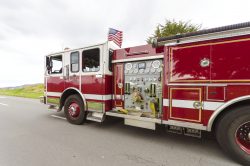 Outside of School Shutdowns, California Governments and Transits Keep Moving

From first responders to public transit authorities in cities from San Diego to Sacramento, and counties from Orange to San Bernardino, SCL customers in municipalities throughout the state are continuing to operate normally aside from school closures.

“The majority of our customers are still working. Nothing is shut down – not even public transportation. On the contrary, they’ve all been proactive about placing orders for all of their supplies,” said SCL Contract Specialist Melissa Carson. “So far no one has had any issues getting anything they regularly order either, which is a good sign.”

Most of what falls under municipalities are considered essential services, exempting them a mandate by California Gov. Gavin Newsom that has forced closure of thousands of businesses statewide.

As a supplier for those essential services, SCL is also permitted by the state to continue operating. Recently, the County of Marin went so far as to provide written authorization for SCL drivers to carry with them, designating them as essential. From a public service perspective, having ready access to supplies that keep vehicles and machinery for first responders and public works up and running has been critical.

“The departments we work with have thousands of vehicles and equipment, and they have a huge responsibility to serve the public, especially in a crisis like this,” Carson said. “To date, oil manufacturers have stated they haven’t encountered any issues with regard to the coronavirus (COVID-19) that impact their ability to support North America, which is good for everyone. The City of Los Angeles alone has 185 locations, so that impacts a lot of people.”

There are other types of supplies that municipalities have reported shortages of – including personal protection equipment – but orders of oil, lubricants and petroleum have not experienced any reported shortage to date.

As with most industry sectors, a driving concern among city and county government officials has been the protection of its employees. According to Carson, many SCL customers have come up with creative ideas to keep people working while maintaining health, such as additional shifts that reduce the number of employees working at a time and the closure of public offices.

“One municipality we work with, for example, went from having 1-2 shifts to now having 3-4 shifts and they’ve opened hours on the weekends,” Carson said. “I think they’re trying to think outside the box, dispersing people throughout the day so they’re not as in close proximity to each other.”

According to the Orange County Register, although some police departments have closed their station doors to the public, they are continuing to respond to emergency calls. “We’re still providing the service. We’re just adapting new ways to do them (including phone and online services) and trying to limit unnecessary contact,” Fullerton Police Sgt. Eric Bridges told the newspaper.

SCL has also adopted measures aimed at limiting contact with customers, particularly at cardlock fueling stations used by a vast number of employees from municipalities throughout the state. Cardless Swipe, an app that allows drivers to conduct all transactions electronically, is offered at many stations as an alternative to coming in contact with an attendant or having to keep track of physical receipts.

Other local government offices have followed suit by closing their doors to the public, but according to Carson, jobs have not been affected. “So far, we haven’t had any of our customers experience furlough. I know it’s happening in other places, but not among any of the people we’re servicing,” she said. “The customers in our area are busy and they’re needed.”

OPPORTUNITIES IN THE MUNICIPAL SECTOR

The greatest opportunity in the municipal sector as far as SCL coverage goes has to do with the availability of supplies.

“We often fill gaps among customers that may have existing contracts with other suppliers,” Carson said. “We are always happy to offer support, even when it comes to products or equipment that may be outside our wheelhouse. We want to do our part to make sure our cities and counties have everything they need to provide their essential services to the public.”